Using Light to Reveal the Invisible 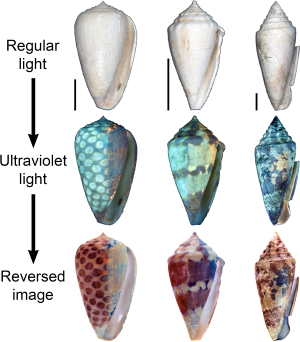 When designing machine vision systems, selecting the optimal wavelength and geometry of light is critical. Get the lighting wrong, and system performance will suffer.

The word "wavelength" is used instead of "color" because not all wavelengths correspond to a visible color of light. Wavelengths around 450 nanometers (nm) appear as blue, and around 650 nm as red. But wavelengths shorter than 390 nm and longer than 700 nm are invisible to the human eye. It is the job of machine vision engineers to discover the wavelength that creates the most contrast between the features of interest and the background.

Sometimes it’s surprising what is revealed by specific wavelengths of light. Researcher Jonathan R. Hendricks was studying cone snail shells that had apparently bleached white over millions of years. He discovered that when the shells were illuminated with 365 nanometer ultraviolet light, their original patterns were revealed.

The vision lab at i4 Solutions includes lights that generate wavelengths from across the full spectrum visible to today’s cameras, including wavelengths invisible to humans. We use these lights to help us discover the optimal wavelength to deploy with each system, and thereby maximize performance.